The right time of revolution

For a impeachment process

We invite these two Italian authors, representatives of a strong contemporary thought, which opens like a perforation of the arch that is drawn between the works of Agamben and the Invisible Committee; or expanding this same arc, between the Italian Seventies, of Autonomy and its feminists, of Tronti, of Pasolini, as well as of the French authors, of Debord, Foucault and Deleuze-Guattari, to a present day where the cry beats with difficulty of the thought of the time of the world civil wars, at the beginning of the 20th century, and that of anthropology, conjugated with the inspiration that comes to us from outside and against Western civilization, from the indigenous, Kurdish, decolonial movement.

We invite these two authors to think together about the right time of the revolution and to appeal to a dismissal process. But why now, when everyone talks about the need for a "constituent process" and the creation of a new state? Well, precisely because the task of thought, said one of the philosophers of the twentieth century, is none other than "to violate reality." Task for a time that if something is not lacking, as we know, it is violence.

We live, as a friend says, in a global age. What characterizes it is both the interdependence of reactions and phenomena and the profound "crisis" of Western civilization. Although for contemporary thought that is rushing to find a way out of civilization, it is no longer just a "crisis", but a true field of ruins, existential, and at the same time ethical and political. Anguish, sadness, confusion, depression are not only dominant diseases of the time, they are the signs of a shipwreck.

Faced with this perspective, the commitment to justice - as the state of things in the world and not as punishment or retribution -, typical of all true thought, must collaborate with the time in the task of guiding us in the middle of this field of ruins.

In dialogue with Walter Benjamin and Furio Jesi, -authors endowed with that "sublime double view" of which Ortega y Gasset spoke, "which allows us to glimpse in a certain present very remote strata of human existence" -, our guests, Andrea Cavalletti and Marcello Tarì, during the two sessions of the seminar, will propose a political genealogy of the impeachment as well as everything that is at stake in determining the right time for the revolution.

On Thursday afternoon they will present the topic in two open conferences with a subsequent debate, in the large room at L’Ateneu La Base.

On Friday morning, with a special schedule due to schedule requirements, we will hold an open meeting. With the idea of ​​continuing informally with the questions generated in the previous day's conferences and deepening the debate.

Andrea Cavalletti is professor of aesthetics and Italian literature at the University Institute of Architecture in Venice. He has curated the edition of several works by Furio Jesi, such as Spartakus (AH editora 2014), and has edited essays on philosophy and literary criticism. Adriana Hidalgo editor has published Mythology of security. The biopolitical city in 2010, Class. The awakening of the crowd in 2013 and Suggestion. Power and limits of political fascination in 2015. - She will be in Barcelona between November 2 and 5.

Marcello Tarì is a freelance researcher. He has published Movimenti dell'Ingovernabile, Ombre corte, Verona 2008 and more recently Autonomie !, La Fabrique, Paris 2011 - Il ghiaccio era Sottile, Italian edition in 2012, also translated into Portuguese, as well as into Spanish, in 2016, in Madrid, with Traffickers of Dreams, as A Communism Stronger Than the Metropolis. - It will be in Barcelona between October 28 and November 5. 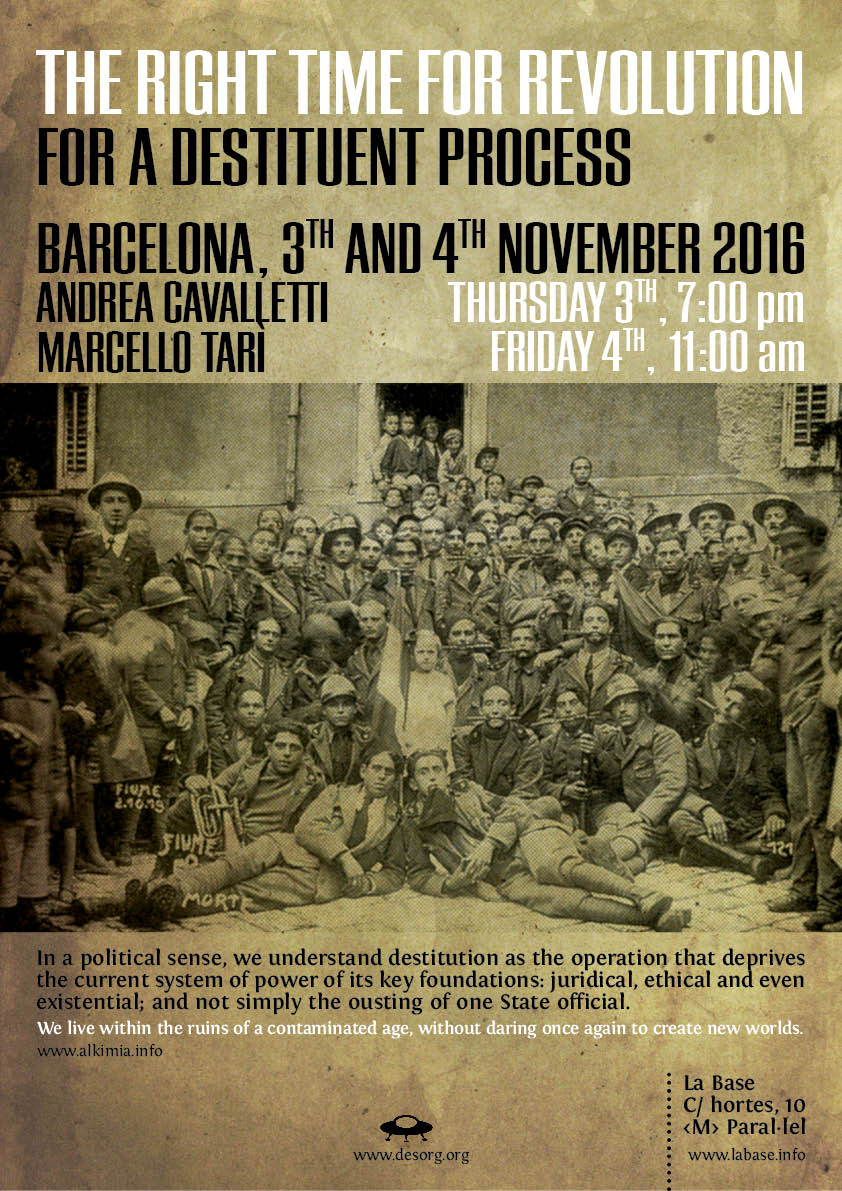