Robert Harding Pittman is a photographer and filmmaker working on social and environmental issues. In his personal work he explores how different cultures interact with the environment and how they confront “development”.

Robert Harding Pittman grew up in Boston and Hamburg, the son of a German mother and American father. After earning his undergraduate and graduate degrees at the University of California,Berkeley, both in environmental engineering, an area of concern that continues to inform his work, he received an M.F.A. in photography and film/video at the California Institute of the Arts (Cal Arts) in Valencia. His main interest is how different cultures interact with the environment and how they manage “development.”

His traveling exhibition and photography book ANONYMIZATION (Heidelberg, Germany: Kehrer Verlag, 2012) was nominated for the Prix Pictet and the German PhotoBook Award. It has received wide media attention including in the Wall Street Journal, CNN, WIRED, Newsweek Japan, The Daily Beast, El País, El Mundo, TVE, ZDF, European Photography Magazine, and Aesthetica magazine. The project has been exhibited internationally in photography festivals, museums, and galleries, and it continues to travel.

His award-winning documentaries, which address many of the same issues treated in ANONYMIZATION, showing the environmental, human, and cultural costs of the development of our lands and the extraction of energy resources, have been screened at festivals worldwide as well as on television.

His photographs and films are in public and private collections. 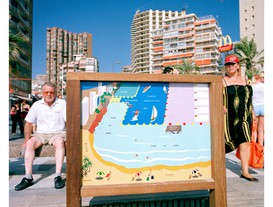