DJ Kadagian came to filmmaking in a very circuitous route.   After graduating from Cornell University in 1985 and spending   a  brief  period  in   publishing  in  the  Far   East, DJ chose a career in the financial markets with an original concentration in the U.S. fixed income markets.  However, his strong interest in technical analysis and its application to the U.S. equity markets led him to develop proprietary trading software designed to time the U.S. markets.

The success of his trading program and the company that was borne out of it, enabled DJ to focus his time on pursuits that truly inspired him.  After a brief time at Yale Divinity School, he felt the best vehicle for him to learn and make a difference was through documentary film.

His films are designed to challenge, provoke and inspire. He attempts to address issues that mainstream media either avoids or covers at a superficial level. His style of filmmaking is experiential and designed to draw the viewer “in” through the use of powerful imagery and music. Ultimately, his objective is to use his films to encourage healthy and honest reflection and dialogue on critical issues of our time.

He is the creator of A Crisis of Faith / the series which includes State of the Union, Quest for the Grail, A Crisis of Faith and Portrait of a Radical. That first award-winning series has aired on the Hallmark Channel, Public Television, the Discovery Channel, Free Speech TV and was featured at over 35 film festivals around the United States and Europe.

His second series of three films is the innovative Moving Poetry Series - RANT * RAVE * RIFF.   Reaching back in time he has gathered wisdom sayings from great poets and film from great cinematographers  and created a complex brew that nourishes the soul as it stimulates the mind.  Designed to challenge, provoke and inspire, these films hit on a broad spectrum of social, political and spiritual issues while effortlessly cutting across traditional lines of gender, race, religion and ethnicity.

His most recent film, Healing the Mind was co-produced with his wife Deborah.  It looks at an alternative way of dealing with the myriad of mental health issues that our young adults are experiencing and looking at a more holistic approach to healing mind, body and spirit by incorporating a 5,000 year wisdom tradition know as Ayurveda.  Debbie has been practicing and studying Ayurveda for over a decade and was the inspiration behind creating this important film. 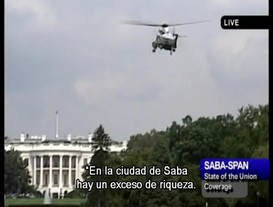 The city of Saba