Graduated in Fine Arts, specialized in painting, from the Polytechnic University of Valencia in 1988. He works in the workshop of the German painter Edmund Keselbach in Cologne in 1990 thanks to a grant from the Tenerife Island Council. Larraz's iconography comes from photographic images of portraits of vedettes, objects, landscapes or interiors collected from generally old magazines. In a small format, his paintings made individually, and not in polyptychs, produce, when combined, unexpected associations allowing new readings. In addition to a clear influence from the aesthetics of Pop Art, Larraz adds a rigorous reflection of concept. He began his artistic career in the mid-eighties with a solo exhibition at the Central Hall of Santa Cruz de Tenerife in 1986. Since 1995 he has been represented by the Saro León Gallery. He highlights his participation in group exhibitions such as Contrahuellas in the Exhibition Room of the College of Architects of Tenerife in 1991 and Members Only in the San Antonio Abad room of Las Palmas de Gran Canaria, 1994; Heresies, projects at CAAM, 1995; The Peter Pan Syndrome at the CIC of the Cabildo de Gran Canaria, Thousands of Excuses at the Círculo de Bellas Artes in Madrid, One hour less in the Recova room in Santa Cruz de Tenerife, 1997. 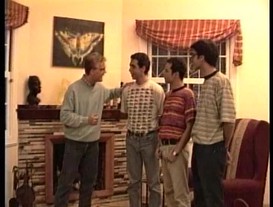