Heroes looks at the war in Iraq through the eyes of two Americans: Celeste Zappala. whose son, Sgt. Sherwood Baker, was killed on April 26, 2004 in an explosion in Baghdad and Patrick Resta, Specialist/E4, who served as an Army medic in Iraq for eight months. Heroes blends interviews about the war and the personal experience of members of the National Guard in Iraq with Ritsu Katsumata's haunting musical score and striking images by twelve independent photographers to tell a story ignored by the mainstream media.

notes: Heroes began as a collaboration with composer and electric violinist RitsuKatsumata. When Katsumata was commissioned to create Dies Irae: Elegy for Victims ofWar for the Binghamton Symphony for their 2006 season, she asked me to create avideo “backdrop” which will be projected behind her as she performed electricviolin with the symphony. My vision of the piece started with peacetime images fromIraq and progressed to the devastation of war and the human toll on both sides. As Ibegan researching the issue and looking for footage and images for the concertvideo, I meet a number of wonderful people, including Celeste Zappala, mother of thefirst PA National Guardsman killed in Iraq and Patrick Resta, an army medic. Twelvephotographers generously contributed images and footage to the project. Aftercompleting the concert video, I decided to interview Celeste and Patrick and createHeroes to give them an opportunity to tell their stories.http://srv2.lycoming.edu/~estomin/Heroes.htm 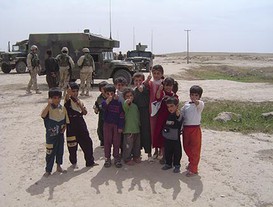