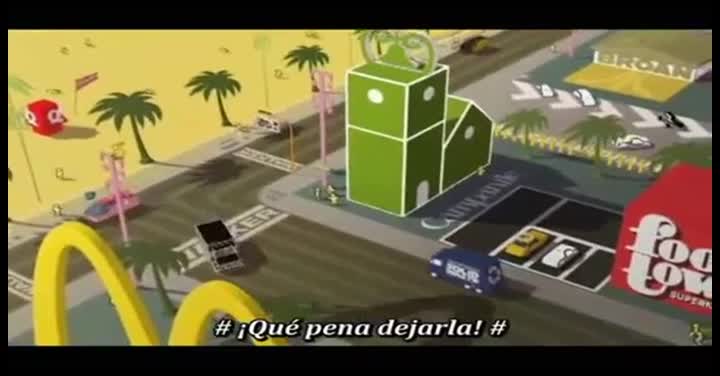 Logorama explores the extent to which logos are embedded in our daily existence. In the words of members of H5, "Logorama presents us with an over-marketed world built only from logos and real trademarks that are destroyed by a series of natural disasters (including an earthquake and a tidal wave of oil). Logotypes are used to describe an alarming universe (similar to the one that we are living in) with all the graphic signs that accompany us in our everyday lives. This over-organized universe is violently transformed when the cataclysm becomes fantastic and absurd. It shows the victory of the creative against the rational, where nature and human fantasy triumph.”

We learn to live with the encroachment of branding into daily life; like the weather, we just accept it as part of everyday living. But the more we become inured to the bludgeoning intrusiveness of commercial lapel-grabbing, the more the brand owners — and the designers who work for them — ramp up their efforts to attract our attention. A world colonized by brands is the theme of a new film by French designers and filmmakers H5. Logorama is a slick 17-minute-long animated movie that appears to lampoon both the Hollywood blockbuster — violent, crude and adrenalized — and the world of branding, a world where logos festoon every surface and where it is customary to be exposed to brand activity at every turn. I say appears to lampoon, because the intention of the filmmakers is unclear. The opening shot is a panorama of Los Angeles, revealing a city where all of the buildings and inhabitants are some form of commercial branding: birds in the form of Bentley logos, Microsoft's butterfly, pedestrians in the shape of the AIM icon, overhead highway signs mounted on Atlantic Records logos, etc. The major characters are revealed in an Altman-esque tableau. The Pringles mascot (David Fincher) pulls into a restaurant's parking lot and propositions an Esso Girl waitress (Aja Evans) who is on a smoking break. Two Michelin Man cops in a parked cruiser (Bob Stephenson and Sherman Augustus) are introduced as they debate the morality of keeping animals in zoos. Across town, Bob's Big Boy (Joel Michaely) and Haribo (Matt Winston) are on a tour at the zoo led by a flamboyantly gay Mr. Clean (Michaely). As the cops order lunch, a call comes in over the radio about a criminal on the loose in a red delivery truck. Both cops spy Ronald McDonald in the truck and give chase. The pursuit quickly veers out of control, as innocent bystanders are imperiled. The kids at the zoo have finished their visit and are back on the school bus. Their bus gets caught up in the chase when Ronald McDonald's truck tips over right in front of the Pizza Hut where Esso Girl is waiting on the Original Pringles mascot and the Pringles Hot & Spicy mascot as they have lunch together. Several guns and biological weapons spill out of the back of Ronald McDonald's truck, tempting Big Boy and Haribo to steal them for sale on the black market. Ronald McDonald takes Big Boy hostage and runs inside the Pizza Hut. Once inside, Big Boy bites Ronald McDonald and runs for cover behind the counter with Esso Girl. Enraged, Ronald McDonald opens fire, giving the police the excuse to start firing on him, and he kills one of the police officers. As the gun battle explodes in to the streets, a low rumbling can be heard across the entire city. A giant earthquake splits the streets of the city open, meanwhile Big Boy and Esso Girl escape out the back and steal a cop car. While running from the police on a stolen motorcycle, Ronald McDonald falls into one of the crevasses (shaped like a Zenith logo). As he tries to pull himself out, he is run over by Esso Girl & Big Boy's car. The duo barely escape the city. As they near the Hollywood sign, it falls apart, sending the giant letters crashing on to the highway in front of them. While evading one of them, they veer off the highway (a series of curves shaped like the VAIO logo) and down a hill. Their car crashes into a tree (American Century logo), and oil erupts in the rifts around town, flooding Los Angeles with crude oil. The hill Esso Girl and Big Boy are on, splits in two, revealing a giant North Face logo. Eventually, the land crumbles around them, swallowed by the sea, leaving them on a tiny island together (with the Esso girl picks up a coloured Apple and has a bite) as the film closes by zooming out to reveal that the entire Universe is made up of even more logos. After the credits, a bald, toothless Ronald McDonald, menacingly laughs and says "I'm lovin' it". 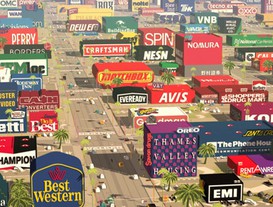 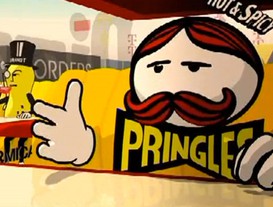 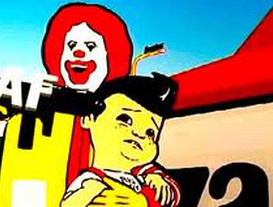 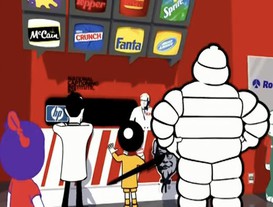