Surplus: Terrorized into being Consumers

Consumer confidence is what makes the world go round. It is also a destructive force that will eventually bring the earth to ecological collapse. Yet there's hope: a new spectre is haunting the Western World - the spectre of Consumer Unconfidence. Why is the lifestyle of consumerism a source of such rage today? How come the privilege of buying goods does not automatically lead to happiness? Why all this emptiness despite our wealth?

Shot in the US, India, China, Italy, Sweden, Hungary, Canada and Cuba during threeyears. Surplus is the result of a complicated editing process by talented musiccomposer/editor/percussionist Johan Söderberg.George W Bush's famous "shopping-speech" calling for a war against terrorism thatdeters the nation from the fear of consumption. Castro responding with hymns to theanti-consumerist, advertising-free island of Cuba. Bill Gates and Steve Ballmerpreaching that the computer will give us peace on earth "bringing people together"while Adbuster Kalle Lasn warns that advertising pollutes us mentally, thatover-consumption is unsustainable and that we are running out of oil.Surplus main man is John Zerzan, controversial philosopher whose call for PROPERTYDAMAGE has inspired many to take to the streets. "That is not violence. Sittingthere doing dope and watching MTV . Then you go and get a job. Just schlep along. Tome that is violence," says Zerzan. "We are terrorized into being consumers." 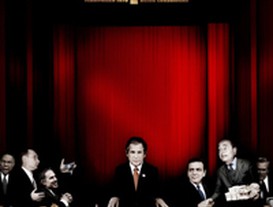