The Dubai in Me - Rendering the world -

This documentary portrays Dubai as the latest neo-capitalist nightmare: a virtual reality reminiscent of Second Life, brought into being by the sweat of an immigrant workforce. What are the real working conditions in Dubai?. The epilogue, shot in the greenhouses of Almeria and Melilla in Spain, shows the similarities of a global business model. In this sense, "Dubai is in all of us".

In The Dubai in Me, a feature length documentary by Berlin-based composer, artist, writer and filmmaker Christian von Borries, Dubai constantly appears as the ultimate neo-capitalist nightmare: a virtual reality reminiscent of Second Life, made real by migrant labor, still empty, much like the office tower down the street. (David Riff) Dubai has rapidly carved itself out a reputation as being a theoretical object. This is how Christian von Borries approaches it and what explains the title of his film. What is laid bare here is less the picturesque market town which has grown up over night, crammed with buildings on the scale of the pharaohs, but more the realisation of a liberal utopia. Dubai is a screen where sad dreams are played out, those inscribed by the imagination of capital, the dreams that haunt us: the Dubai-in-me. This is why von Borries combines shots of Dubai with local real estate advertising clips. This is why he adds sequences lifted from Second Life to these. Here and there this seemingly exponential growth, this same desire to appropriate real estate, the same flights of fancy. Here and there, the image has the same role, eventually to become one big eternal, ideal residence. If von Borries sets out to analyse this Eden of Capitalism, he refuses to believe that he will be able to pass easily through the looking glass, or at least beyond the image, in order to get by without it. In this exemplarily free film, the image is not just a tool it is the fertile ground itself which has to be tilled. However, rather than attempting to imbue some kind of dignity, he doggedly exploits everything he sees, reflecting how the mirage of Dubai itself was constructed by exploiting so many new slaves. Playing with the typology of images and the orthodoxy of documentary filmmaking, amusing himself with voice-overs and displayed text etc. It is like watching a joyful game of massacre. Jean- Pierre Rehm (director FIDMarseille) 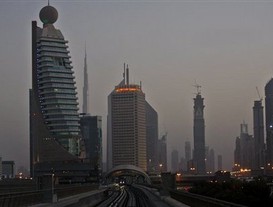 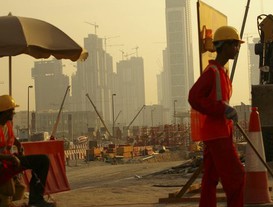 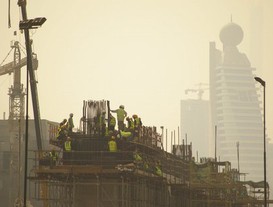 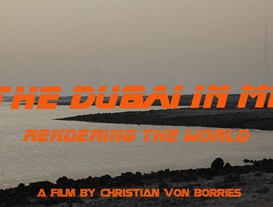