Departing from the title, the video establishes a divergent parallelism in between the wife of the Senegalese migrants’ and the Odysseus’ Penelope. The protagonist do not just take Penelope’s roll, but subvert it. Parallelism due the similarity in the long periods waiting for their husbands’ return home. Divergence because, here these women take the enunciation power, to tell us how they deal with their reality and they how negotiate with the social pressure surrounding them, that like in the Odysseus, would love relegating them into a second term. 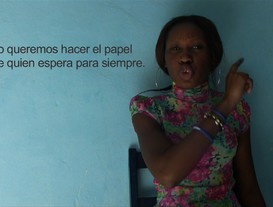