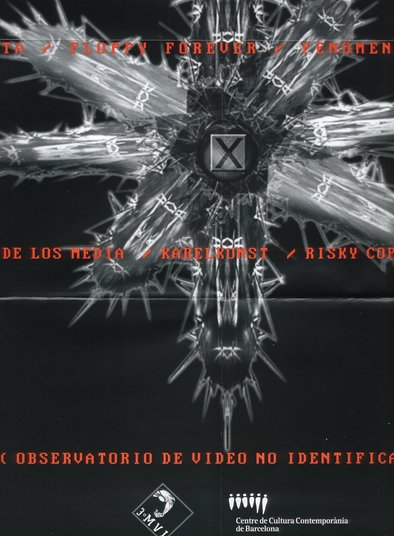 The third edition of the MVI independent video showcase strengthens the foundations of this project. Not necessarily in the sense of ensuring its permanence and continuity, but insofar as it fulfils most of our original aims, taking us well away from the role of a video festival or fair. The aspects we consider paramount are: to be able to pay a fee for all works screened, thus recognising the important role of the authors, which is unaccountably too often overlooked; to maintain our independent nature (we are very grateful to the sensible existence of a public cultural centre like the CCCB, which hosts totally independent projects); and to organise a completely open call for works, connecting filmmakers and artists from different origins and backgrounds, based on quality and the radical nature of the content as the sole criteria. We also wanted to leave the door open to working with different programmers, as long as both the works and the programmers share our commitment to independent video and to the need for (or existence of) an independent audiovisual discourse.

In the 3rd MVI, this approach has led us to focus on two key issues that often intersect: Identity and Mass Media. An idea of identity not only influenced by a conceptual relationship with others and with the media, but also by inner experience – that non-transferable aspect of our individual journey – in a shifting context in which the real expands to embrace the media and the lived experience of everyday technology.

Playing the role of free extensions that either emphasise or contradict the core content of the 3rd MVI, we have invited a series of independent programmers: Rick Prelinger, with The Rainbow Is Yours, an all-colour celebration of consumption that reveals the urgent need for a media archaeology; Arjon Dunnewind, from KableKunst Impakt cable television network; and Eugeni Bonet with Demontage bis, a micro-extension of the Demontage programme that was presented in several venues around Spain but surprisingly not in Barcelona. The contents and texture of the various works that make up this 3MVI programme also raise a paradox inherent to contemporary independent video: the so-called “risky copyright situation” arising from the fact that a considerable number of artists and filmmakers see all existing film and video material as a reality available to them as a source of material for their works. This brings them straight up against legislation that, as it stands today, would have made some of the century’s most significant works of art legally impossible, because it places individual creative projects on the same footing as the use of images by mega-corporations.

In this 3rd MVI we introduce two new programmes, Zona Abierta by Xaxi Hurtado and Floppy Forever by Miquel Jordá, both consisting of digital media works (interactives, QuickTimes, etc...) which will be made available on various computers. These sections are presented here as prototypes, and will be integrated into the rest of the programme in future MVIs, reflecting the increasingly hybrid nature of independent audiovisual production.

In addition, there will also be a continuous screening of the video Portrait by Muntadas. A work that has incidentally become emblematic of this MVI, given that it conjures up the identitity-role-media theme that runs through the programme.

THE RAINBOW IS YOURS. A all-colour celebration of consumption from the Prelinger Archives

No matter how disconcerting we find the “fabulous fifties”, the fact is that its objects, designs, and aesthetics are still with us today. I think that the period we call the “fifties” actually begins with the post-war economic boom of the late forties and ends with the 1964 New York World’s Fair, the last national celebration of commodities and desire. In the fifties, the pressure to consume was stimulated by means of intensive design projects. Fantasy and adventure seemed to be directly linked to advertising and consumer products, and a colourful, appealing media horizon managed to distract attention from issues such as race and class discrimination, the deterioration of cities, and threats of the nuclear age. This all-colour programme celebrates the sheer theatricality of American design – the marriage of style, futurism, convenience, and fantasy. These unashamedly Populuxe films aim to create desire without need, flirting with reality and gender roles in the manner of the Hollywood musicals they emulate. When American nuclear families seemed to do nothing but produce more and more children, advertising films became more artistic, sometimes featuring almost Bohemian couples who carried out their work lightly, if at all, and were always very well-dressed. In fact, mass consumer products have never had such an aura of mystery as they did then. This very complex period has left behind many items that continue to fill marketplaces today. But some authentic consumer and design materials from the period have not been sufficiently accessible until now. As part of their ads and marketing campaigns, big American companies made thousands of films each year. Some, targeted at mass consumption, were shown on TV and screened in schools, car dealerships, and club and association meetings. Others were screened to the workers, sales staff, and managers of the companies themselves. These were some of the most entertaining films of the fifties, and they remind us of the bygone mentality of their contemporaries. I hope that what now makes them entertaining – the fantasy, unreality and celebration of blind consumerism that they professed – will appease our nostalgia and, in a sense, keep us away from impossible dreams of time travel. Rick Prelinger is the owner of the Prelinger Archives, a collection of 33,000 educational, industrial, and marketing films in New York. His series of 12 CD-Roms, Our Secret Century, will be published by The Voyager Company in early October and will be available to the public at 3MVI.

DEMONTAGE generally involves assembly (or re-assembly, collage, editing, appropriation, recycling...) and also entails deviation, deconstruction, dismantlement, dispossession, and other ways of taking apart pre-existing audiovisual material made by others, against the grain of its original meaning, use, and purpose. This programme is like a small extension of a selection that I put together in 1993. DEMONTAGE: Film, Video/Appropriation, Recycling was produced by IVAM in Valencia but also presented in Madrid, Donostia, A Coruña, and the World Wide Video Festival in The Hague. When I was invited to bring this “encore” to 3MVI, I decided to update the previous programme by adding some new works, while maintaining others that I consider “seminal”. I have also broken down the programme into two parts, which refer to two of the sources or streams of audiovisual materials that are most commonly subjected to dismantling and reassembly. The programme is a selection of feedback and abductions based on the variety (or, depending on how you look at it, the uniformity) of content, products and genres generated from films and TV. A selection that is expanded by other kinds of “demontage” in other sections of this 3MVI.

Digital Zen, hymns of angst, to hell with Elvis, Le chien andalou 65 years later, The Spelling Quiz with Man Ray, communist driving lessons, and young mothers wishing they were something else. KabelKunst has seen and shown all of this. KabelKunst is a monthly programme dedicated to video art and experimental film, broadcast on Utrecht’s cable TV. It works closely with IMPAKT Festival. From October 1993 to June 1995, KableKunst was part of the regular programming on the local television network. From November 1995 it was to have been included in the so-called Open Channel, but...

We would like to pay homage to the obsolete floppy disk, and to prove that even this humble, forgotten medium could be used to express ideas and transmit messages that are potentially as interesting and impressive as those made with less limited media. This section includes two categories: Digital Video, with QuickTime (MOV) and Video for Windows (GEEZER), and Self-Excusable Applications, files with creative content (interactive or other), made with software like Macromedia Director, Adobe Acrobat, programming languages or similar.

Zona Abierta is a compilation of works from New York and other parts of America. It consists of two parts. The first presents a selection of interactive works that revolve around the experience of exploring information through play. The second part consists of video files in formats such as QuickTime and AVI, made by artists and directors from the world of film and video.