Sarah Bouyain was born in Reims to a French mother and a Burkinabé father. A graduate of the École Nationale Supérieure Louis Lumière, she worked as a camera assistant, then as a cameraman in cinema and television. Les enfants du Blanc is Sarah Bouyain's first documentary film.

Based on her relationship with her grandmother, the film paints a portrait of a community of mixed-race people born during colonisation in Burkina Faso.

Sarah Bouyain then wrote a collection of short stories Métisse Façon. Notre Étrangère is her first feature film. It was selected in international festivals (Venice, Toronto, Ouagadougou...) and won the grand-prix of the Amiens festival in 2010.

Sarah Bouyain's work, her collaborations in the theatre with Éva Doumbia and Astrid Bayiha and in the academic world with Frieda Ekotto (University of Michigan), Anne Bationo-Tillon (Orange Labs, University of Paris VIII), Jean-Bernard Ouedraogo (EHESS, CNRS) revolve around the question of crossbreeding, the encounter between France and Africa, questioning everything that this encounter implies and presupposes.

For the past two years, she has been offering film creation workshops for secondary schools in the Paris suburbs. 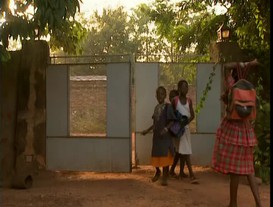