What is nature? What is natural? Is a New York skyscraper “less natural” than a California Redwood? Are we humans controlling the evolution of the earth, or are our actions, for example paving over the ground, just a part of the process? How we transform the earth to suit our needs and desires is an important issue for me. The land is in a state of flux, being competed for by colonizing species of vegetation, or “weeds”, and developers’ bulldozers and cranes, all of which are just trying to survive. Using both photography and film/video, I am interested in documenting the human impact on the land and how culture, landscape and economics influence each other. In my photography project, “Desert Real Estate”, I have been documenting how the desert terrain of Southern California is being rapidly flattened and terraced to make way for enormous plots of tract houses, essentially new “planned communities” with green lawns for the ever-expanding population of Los Angeles. My current photography and documentary film project, “Concrete Coast”, deals with many of the same issues on Spain’s Mediterranean coast, which has a similar geography and arid climate. Here the land has been, and is being rapidly transformed for tourism and for the arrival of northern European retirees. 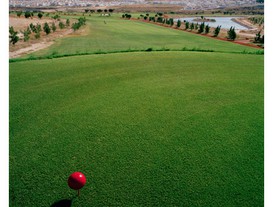