Raúl Riebenbauer (Valencia, 1969) is a journalist, writer and documentary director.

The investigation that he carried out for almost ten years on one of the last executed with a 'garrote vil' in the Franco dictatorship stands out. The result was the non-fiction book ‘Georg’s Silence’ (RBA, 2005).

Between 2012 and 2015, he established his residence in Lima, where he taught classes, conferences and workshops on investigative and documentary journalism at various universities.

Since his return to Valencia he has focused on directing documentaries.

His latest documentaries are: ‘Yesterday/tomorrow’, a medium-length film about migrant minors (Audience Award at the 21st edition of the Thessaloniki Documentary Festival); 'I was Anderssen', a short film created after the death of his father, currently in the competition phase at festivals (for the moment it has been selected in: Family Film Project in Oporto —where it obtained a Special Mention from the jury—, Beijing International Short Film Festival, MiradasDOC, DOKer Fest in Moscow and Canberra Short Film Festival); and 'Swifts', a short film shot with a mobile phone during forced home confinement due to the Covid-19 pandemic. 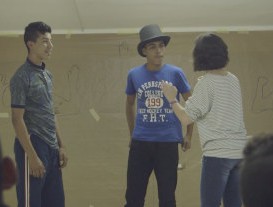