Born in 1976 . In 2001 she has graduated St. Petersburg University for Arts and Culture, Department of Film Directing, started her career as an Assistant Director at St. Petersburg Documentary Film Studio. Her first films, "Letter" and "Communal Residence" were well-received both in Russia and abroad and marked with awards at many domestic and international film festivals, such as "Message to Man" (2003; St. Petersburg), Neubrandenburg IFF (2003; Germany), and the others. “Communal Residence” was part of a larger project "St. Petersburg 2003." After the project was completed, she was invited to work in Moscow on a documentary film series "Dating Service" about the single people who look for their other halves. At the same time, she worked on a project "Faces of the Epoch," directing such films as "Vishnevskaya and Rostropovich" among the others. http://mwave.irq.hu/index.php?nyelv=eng&modul=filmek&kod=1739 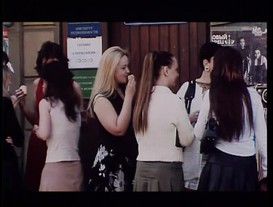