Oliver Ressler is an artist and filmmaker who produces installations, projects in public space, and films on issues such as economics, democracy, migration, the climate crisis, forms of resistance and social alternatives.

Ressler has completed thirty-eight films that have been screened in thousands of events of social movements, art institutions and film festivals. A retrospective of his films took place at Centre d’Art Contemporain Genève in 2013.

In 2002, Ressler won the first prize at the International Media Art Award of the ZKM in Karlsruhe and he is the first prize winner of the newly established Prix Thun for Art and Ethics Award in 2016.

For the Taipei Biennale 2008, Ressler curated an exhibition on the counter-globalization movement, A World Where Many Worlds Fit. A travelling show on the financial crisis, It’s the Political Economy, Stupid, co-curated with Gregory Sholette, has been presented at nine venues (2011-2016), including Pori Art Museum in 2013.

Since 2019 Ressler directs Barricading the Ice Sheets, a research project on the climate justice movement, funded by the Austrian Science Fund, that will lead to an exhibition at Camera Austria in Graz in September 2021. 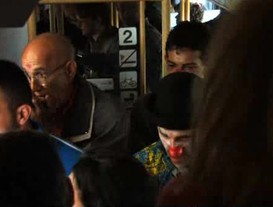 What Would It Mean To Win?