In 1938, the novelist, intellectual and politician André Malraux directed his only film, ‘Espoir/Sierra de Teruel' , a valuable testimony to the experiences of the Republicans during the Spanish Civil War. Shot in Barcelona and Montserrat, the film was banned during Franco's dictatorship and was not released in Spain until 1978. The film looks at the vicissitudes of a large group of Republican fighters, and their determination to stop the advance of the Fascist troops by blowing up a bridge on the Zaragoza road, near the town of Linás. In close collaboration with local farmers, the squad of soldiers try to keep their spirits up and manage to get through the non-stop bombings and the harsh, continuous attacks of their powerful enemy.

André Malraux (París 1901-Cretéil 1976), admired and influential figure of French intelligentsia and professed anti-Fascist –after the Second World War, home culture minister of the Charles De Gaulle governments– sided with the Republicans at the beginning of the Spanish Civil War. After several injuries during the war, he decided to change his strategy and embark on an intellectual crussade against Fascism. He first travelled to North America to spread the Republican thinking and then went back to Spain, set on carrying out an ambitious and highly committed filming endeavour. Malraux wanted to adapt his novel ‘Espoir' with a depiction of the military campaign on the mountain range of Teruel. The novel director, who enjoyed the indescribable collaboration of Max Aub with the script and the adaptation of his own original, wanted to shoot the film in France, but he did not manage in the end due to lack of financing. He then moved his team to Barcelona and Montserrat, where he shot the film between the beginning of 1938 and the defeat of Barcelona, just one year later. The shooting of ‘L'Espoir' was a true odyssey, since the shooting crew had to face the expected inconveniences of the war they were depicting. The bombings often left them without any light nor means to defend themselves against the enemy fire. The shooting of the air sequences bumped into the serious opposition of Fascist planes, ready to shoot down a plane loaded with cameras rather than machine guns. Malraux had at his disposal the collaboration of extras and walk-ons to play the part of fighters and farmers, most of them were farmers from Prat de Llobregat, a location very close to the exteriors shown in the film. From today's perspective ‘L'Espoir/Sierra de Teruel' is an extremely valuable historical and filmic document where Malraux –with his only filmmaking experience– shows an extraordinary command of cinema language, ellipsis and symbolism as inalienable aesthetic weapons and unusual lyrical expressivity in portraying both the characters and the most demanding war scenes. However, despite its obvious artistic virtues, Malraux's film is a blatant propaganda document of the Republican side which contrasts with films of opposing ideology produced by Cifesa and in vogue during the years immediately after the Civil War like Antonio Román's ‘Escuadrilla' [The Squadron] (1941); Carlos Arévalo's ‘¡Harka!' (1941) and Juan de Orduña's ‘A mi la legión' [Follow the legion] (1942), almost invariably starring Alfredo Mayo. 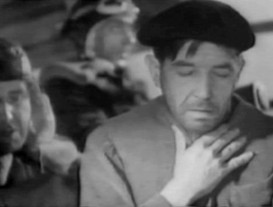 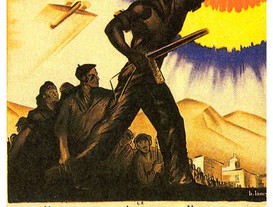 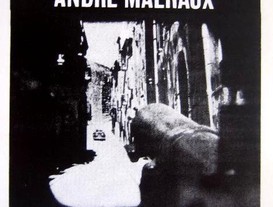